Every Caribbean island has its own cultural folklore featuring ghosts, ghouls and scary creatures that allegedly roam the island — scary urban (and country) legends that locals still swear by to this day. You’d be surprised at how many Caribbean folklore stories share similar qualities, story lines or creatures to Western myths of zombies, vampires and spirits. Learn a little bit more about some of the creepiest Caribbean urban legends from Jamaica, Trinidad, the Dominican Republic, Haiti and Guyana.

You’ll hear talk of duppies in any Jamaican home. Originating in Africa and later brought to the islands, duppies’ existence stems from the Bantu religion that had a heavy focus on worshipping ancestors. Comparable to a common ghost or spirit, duppies are generally departed loved ones who appear to you when you are in need of advice, cheering up or a good scare.

Evil duppies set out to haunt the living and can even hurt or kill people if controlled by Obeah-men, practitioners of a dark spritiual craft. A duppy can appear in the form of the departed person, an animal, a puff of smoke, a shadow or even a cold breeze. Evil duppies generally take on larger, more sinister looking forms like the sadistic Rolling Calf (read more below).

Most Jamaicans living on the island, and even those residing in other parts of the world, believe in duppies’ existence, taking no chances to come into contact with them. Many locals even have tales of personal experiences with duppies or of seeing a “good duppy” in their dreams.

One of the most popular Caribbean urban legends is the Soucouyant, sometimes referred to as Ole Higue. Native to Dominica, St. Lucia, Haiti and Trinidad, the creature takes on the form of an unassuming elderly woman in daylight and a shapeshifting fireball demon once the sun goes down. The Soucouyant sheds her skin at night, turns into a fiery skeleton and, similar to a vampire, sucks the blood of her victims. She can allegedly be stopped by throwing rice, sand or salt because she is compelled to count the individual grains.

In a twist of fate, the Soucouyant or Ole Higue will die if she consumes too much and kills her victim, who will then transform into a new Soucouyant, ill fated to live out the rest of its days as a bloodsucking creature of the night. The appearance of a black and blue circular mark is the tell-tale sign someone has been visited by and victim to a Soucouyant. While the legend has faded in some islands, Haiti and Trinidad still find the Soucouyant to be an elusive but persistent creature. Some even believe the shed skin of one is a valuable asset for Voodoo and black magic rituals.

Sources estimate up to 80% of the population in Haiti practices Vodou, resulting in many Caribbean urban legends that draw inspiration from the religious rituals or surrounding lore including Haitian zombies. In fact, western myths of zombies are actually rooted in Caribbean folklore from Vodou traditions.

The first mention of Haitian zombies was in the early 1600s and mirrored the belief of enslaved Africans that death would bring them back to a heaven-like afterlife in Africa where they could be free, but that suicide would force them to “live” in the plantations forever, condemned to become soulless zombies that could be brought back by Vodou priests. In traditional Caribbean urban legends, Haitian zombies are actually just depicted as undead enslaved Africans, not as rotting corpses trying to eat human brains.

The Rolling Calf myth revolves around a specific evil duppy who terrifies and tortures people, sometimes killing them with fiery breath or sharp horns. Originating in Jamaica during the 1800s, this Caribbean folklore became popular as there was little electricity, making evenings extra dark and spooky and the perfect setting to share spine chilling stories of creatures who roam nearby at night. The half man half cow creature, often depicted as a large, sinister bull, has blood red eyes and wears a thick chain around its neck. It is said that when a person hears this ominous rattle, they know the Rolling Calf is coming for them, immediately instilling fear and panic.

Various Caribbean urban legends suggest that the Rolling Calf is said to be the spirit of someone who was dishonest, evil and wicked during their life on earth. However, occasionally a Rolling Calf is a lost soul who seeks out evil people among the living, punishing them for their wrongdoings. The myth states that there are ways to escape an attack from a Rolling Calf, such as throwing various objects on the ground as it is compelled to count just as all duppies are. Other methods are to continuously make the sign of the cross or threaten it with a whip.

The siren-like demon, La Ciguapa is part of ancient Dominican folklore. Disguised as a beautiful, sultry woman with long black hair and striking features, La Ciguapa lures lonely men and boys out into the woods to feast on their bodies and trap their souls forever. It is said that once a man lays eyes on La Ciguapa, he is entranced and will follow her deep into the woods and back to her lair. The Caribbean creature’s feet face backward, making her hard to track.

La Ciguapa typically comes out at night and, for many, is considered an omen of death if heard or seen. One is never to look into her eyes as she will immediately enslave you. This urban legend is still told to children today, warning them to never go into the woods at night. Many Dominican locals have even claimed to see La Ciguapa in the flesh, others weren’t lucky enough to escape her.

The Bacoo is a mischievous spirit that resides in a corked bottle.

Hailing from Guyana is the Bacoo, a spirit in the form of a mischievous little man that resides in a corked bottle. Though not inherently evil, the Bacoo is controlled by evil dwellers and requires a lot of milk and bananas to keep him happy. If well fed, the Bacoo will reward his owner with wealth and good tidings, but if he is undernourished, he will wreak havoc and attempt to harm whoever keeps him. Though many now believe that the Bacoo is a myth, Guyanese locals will still occasionally throw an empty wine bottle with a cork into the river just in case a Bacoo is living in it.

Hailing from Barbados, this Caribbean folklore has been passed on from generation to generation as one of the creepiest, most menacing creatures around. The Heartman is often used to scare children into behaving, because the legend states that the creature comes after disobedient kids, carving out their hearts and feeding them to the devil. He is pictured as a skeletal man with cow legs, dressed in all black with chains, weapons and a huge black hat. The Heartman’s signature is a black hearse he drives around in, frequenting churches and parishes, sometimes giving candy to children to trick them into getting close enough for him to attack.

One of the most popular Caribbean urban legends is the douen from Trinidad and Tobago. Originating from West African storytelling, the douen is a small creature embodying the soul of an unbaptized child who has died and now eternally wanders around in the forest. The child wears large straw hats to hide his featureless faces and his feet face backwards, so tracking where he’s been and where he is going next is nearly impossible.

While their 2-foot frame is not threatening by appearance, the douen’s intentions are. They attempt to lure other unbaptized living children into the forest to become lost forever, eventually dying and becoming douen as well. It is said that you should never call your child’s name in an open area or near a forest, for the douen will call them as well, leading them astray to never be found again.

Other Characters From Caribbean Folklore

Some notable mentions of Caribbean folklore left off of this list due to their lack of fright are Anansi, a little spider man known for being a trickster and Jamaican River Mummas, or mermaids, which have actually been reported under the Flat Bridge that goes across the Rio Cobre.

Not spooked yet? Take a look at some terrifying haunted Caribbean destinations you can actually visit that might send that chill down your spine. 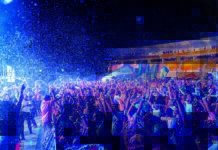 5 Caribbean Art Festivals You Need to Experience Before You Die