While Jamaica is well known for its dominance on the track, the island is not-so-quietly dominating in another surprising realm—the international stock market. In 2018, Bloomberg ranked the Jamaica Stock Exchange as the best-performing market in the world, generating the highest rate of returns. This strong showing continued in 2019, ranked as the fifth highest in the world on returns. The market earned an average 34 percent on investments. For the past five years, stocks have surged over 600 percent overall—achieving the world’s best performance among international markets.

This Cinderella story marks a dramatic turn of events for the island. At the beginning of the 2010s, Jamaica had been laboring under mountains of debt, says Leary Mullings, founding senior partner at Crichton Mullings & Associates, a Miramar-based business consultancy serving clients in the U.S. and Jamaica. The government, in order to raise capital, “had to offer higher interest rates to encourage people to buy their bonds, just to get money to pay teachers and police,” he explains. “This only created a vicious cycle, because they had to borrow more and more money just to pay this growing debt.”

The debt fever finally broke in 2013, when Jamaica took a controversial US$1billion, four-year loan from the International Monetary Fund. The decision received intense criticism for fear of further economic constraint. The loan agreement, however, finally helped “wean government off of all this borrowed money,” says Mullings. It enhanced tax collection and required more financial accountability from government departments. This became a boon for the stock exchange. As bond interest rates fell, institutional and individual investors at home and abroad turned to the market for more opportunities. 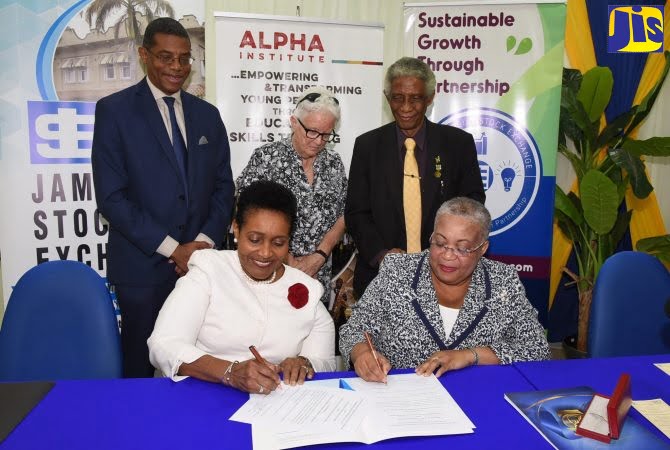 Thanks to some forward-thinking innovations, the government created the Junior Market. This platform allows smaller emerging companies to raise capital on the stock exchange. “It has helped a number of companies come out of their shadows, and become national entities,” says Mullings. It’s also become a valuable resource for non-profits. The Alpha Institute, a 140-year-old charity serving at-risk youth, is raising JA$19 million on the exchange to support their work.

Investing is far from a millionaire’s game. “The government has privatized a number of companies, tailoring the listings for small investors,” says Mullings. The Manchester-based Wigton Windfarm Limited is the most recent success story. Last May, the former government entity generated JA$14 billion for just 50 cents a share for its initial public offering (IPO). Over a third of the buyers were first-time investors.

For those among the diaspora interested in investing, the process has become easier. About 13 certified, locally-based brokerage houses can facilitate their needs. Internet trading is available through the market’s online platform, JTrader. Trading through a broker allows investors to avoid charges like stamp duty and transfer taxes, which are significantly higher than the average brokerage fees. To open an account, potential investors need a Jamaican bank account, proof of identity, proof of address and a tax registration number. Some firms will also require references.

Though the future is never certain in any market, it’s clear the Jamaica Stock Exchange is on the right track. “This is really the time for small investors to participate,” advises Mullings. “Based on our analysis of the economy, we expect the conditions that support the strong performance of the exchange to continue for some time.”