When my brother Rich began his master’s degree program in expressive art therapy in the early 2000s, I thought—really?

Art therapy? As life would have it, years later I found myself immersed in a world where this discipline, which I considered inconsequential, would prove to be a healing force for many of the people I have grown to respect and admire.

One of these people is artist Niki Lopez, who has struggled to overcome unspeakable trauma for years. For me, the situation is personal, because I have seen it up close—in her eyes, in the crying eyes she paints, in the smiling mask she wears to get through the days, and the distorted ones she sculpts.

It wasn’t something she spoke about initially—the emotional, physical and sexual abuse she endured growing up in a religious cult. But after we became intimate, she opened up to me and started sharing the nightmares of her childhood.

By way of her survival story, I’ve learned that art is a tool that can be used to cope with physical, emotional and psychological damage. Niki, and some of the other brave women in my circle, have shared stories of how artistic self expression has helped them heal.

Niki, who is of Panamanian, Jamaican and Cuban descent, used art to help her survive the 14 challenging years she spent in the cult. She confided, “I remember I would always draw eyes that were crying that bled into an ocean. I would write. There was nothing I could do about my situation.”

Homegrown was her first piece directly related to that time in her life. It’s a sculpture of her as a child wearing a hijab—a head covering Muslim women and girls are traditionally required to wear. Behind the sculpture are handwritten phrases like “I was chosen?” “Can they hear me?” and “where are my crayons?”

“Through art, I was able to start addressing my traumas and eventually got into counseling. This was 15 years after escaping the cult, but it started coming out in my work. And then I started sharing and people were impacted.”

Her signature mask Healing from Within is the first work in which she dealt with mending these wounds. “This is about the work I’ve done from the  inside. This is when I really started to shift my life.”

In addition to making art, Niki hosts workshops and talks, creating safe spaces for herself and others to discuss topics considered taboo.

As a child, Haitian multi-disciplinary artist Nzingah Oniwosan was physically and emotionally abused by her mother, who suffers from a mental illness, and was molested by a close family friend.

“Had it not been for art, I would have probably killed myself or would not have been able to survive. It was an escape from reality. I created a world that I didn’t have. My work was very pretty and I cared about perfection.”

While she was growing up, she was forbidden to dance by her religion. Today she dances passionately in celebration of her freedom from the emotional bondage of her early life. Some of Nzingah’s work addresses the trauma directly—her poetry, a one-woman show, and art exhibits that “unpack what we don’t talk about as survivors.”

“If it wasn’t for the art, I wouldn’t be the version of the person I am today. Art helped me cope. Prior to getting counseling, it allowed me to channel what I was feeling.”

Sonia Baez-Hernandez was a professor at the University of Chicago when she got diagnosed with breast cancer. The illness itself perhaps proved not as traumatizing as the way the healthcare system treated her as a black woman, as a Latina woman (of Puerto Rican and Dominican descent), and as a person without health insurance.

She recalls getting an over-the-phone diagnosis, and the doctor scheduling surgeries without informing her about the details of the procedures. She advocated for care with dignity and used art to help her navigate her experience.

Sonia began photographing and video recording herself through chemotherapy, surgery and all other details associated with cancer treatment. She produced the film Territories of the Breast which shares her personal narrative and the stories of other cancer survivors. “My first work following the experience was about the pain and suffering encountered but never expressed. All these violations of rights. The modification of my body.”

For her visual installations she began working with Barbie dolls. “I wanted to talk about how we think about perfect bodies through the doll. Talk about the fear women have with breast cancer—fear of making love, being seeing without breasts, without nipples, with scars.”

Her work with the film allowed her to share breast cancer as a collective experience. “People feel moved and connected to the work, not just for breast cancer. It’s universal—the fragility of life.”

Chastity, who has ancestry from Jamaica and The Bahamas, describes “trauma related to racism and misogyny” consistently present in the day-to-day lives of black people and women in America.

She points to the environmental impact of spaces “not being created with us in mind and spaces created to exclude us.” She recalls her first encounter with racism at eight years old, in a new school where she was the only black student.“There was an expectation that I’d fall into the angry black girl trope. My peers expected aggression out of me that I hadn’t previously felt pressured to express.”

At present, Chastity uses artistic sculpture as an outlet for her feelings. She says her art is visually beautiful but hopes it also comes off as alarming. “I want to stir something, some sort of urgency.” A dichotomy of raw emotion juxtaposed against the subtle backdrop of everyday objects and shapes is apparent in her work.

For her piece Together she lay on the floor and created a cast of her body, then duplicated it to look like two bodies sleeping far apart, covered with separate pieces of fabric. “This piece allows me to share trauma and be present to the trauma.”

Looking at the piece you recognize her sadness, her need to be seen and desire to be protected. Creating art has been a means of coping for Chastity, who says, “There are so many problems, but art gives me the opportunity to focus on the specific issue that I’m making my work about.” 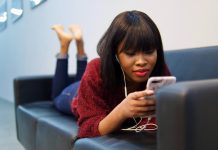 Dive Into The Culinary Excellence of Belize with “Homegrown”