South Florida’s carnival season has just begun, and the kids were in on the action this past weekend for Miami Broward Junior Carnival 2018. Held at the Central Broward Regional Park, this year’s parade of bands showed off the amazing creativity of regional bands, and the blossoming talent of our next generation of masqueraders. Check out all the fun below.

Fly Away: The Natural Disaster Mas team pulled all the stops for their costumes this year, as shown by this adorable band leader all decked out in plumage. The crew swept the second place spot for best mas band.

Kiddie’s First Carnival: This little masqueraders are all smiles in their “Illumination” band costumes, designed by Party Room Squad.

Imaginary Colors: Decked out in dreamy blues and regal violet, the Royalty Kids masqueraders lived up to their names this year, winning third place for best mas band. This band leader is proudly guiding her crew in the fantasy-themed costume.

The Champs: These three masqueraders of the Wassi Ones crew show off their candy-inspired costumes, which swept first prize for mas band of the year 2018. This particular design borrowed its hues from the classic mint candy.

Dancing Queen: These young performers from the Champa Chameli Dance Group are all smiles following their traditional dance performance at the festival. 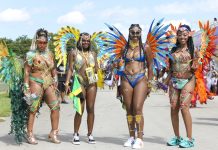 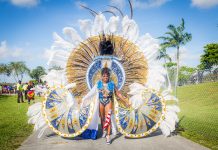 The Anatomy of Miami Carnival 2021

The Most Beautiful Island Girls