I was pleasantly surprised when I was asked by the producers of ‘Taste the Islands’ to appear on their show. I had seen Season 1 and recognized the value of such a show in showcasing Caribbean culinary traditions to a global audience, so I gladly accepted. This fit perfectly within the mandate of the Consulate-General, promoting the diverse expressions of Jamaican culture.

Of course, growing up in a Jamaican household, food was very important. Some of my favorite gastronomic memories came from times with my grandparents, who had raised a family of eleven children. I recall one weekend while visiting with them, I came across a bucket covered with a large silver tray, and a brick placed carefully on top. Being ever so nosey, I took a peek. Inside was a “sea cat”, better known as an octopus, and its tentacles immediately began unfurling towards the rim of the bucket. Luckily I had the presence of mind to quickly replace the lid and the brick. Little did I know that was to be Sunday dinner, and believe me, it was the best curried octopus that I have ever had!

My grandmother also made the best rice and peas, and while my mother’s comes close, she too would admit that “Ma B’s” was better – the ideal combination of rice that was of the perfect consistency, with the peas soft but not mushy, and the delectably complementary flavors of thyme, coconut milk, scotch bonnet pepper and an almost imperceptible hint of sweetness.

In my immediate household, Sundays were reserved for a full range of typical delights. My mother had a love of French cuisine, so scalloped potatoes or cabbage-au-gratin were often included. To this day, anything in a cheese sauce tastes better! My mother reigned supreme over dinner, but my father was the breakfast king, whose liver and bacon, steamed callaloo and fried dumplings are legendary. Many have tried, including me, to replicate these dishes, with abysmal results.

While I admit that I can hold my own in the kitchen, having displayed these skills and winning the quickfire celebrity chef challenge at the Jamaican Jerk Festival in South Florida a few years ago, I prefer to bake. One of my signature creations is rum cake, with its light, buttery flavor, and a healthy dousing of good Jamaican dark rum.

Jamaica is a land of many cultures and they are reflected in our cuisine, representing a perfect melding of flavors that are uniquely our own. I therefore salute the producers of Taste the Islands for their vision, and their dedication to creating this vehicle for sharing the culinary culture of the Caribbean with the world. Best wishes for a successful Season 2! 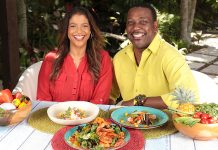 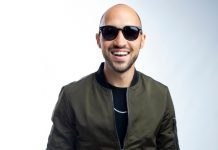