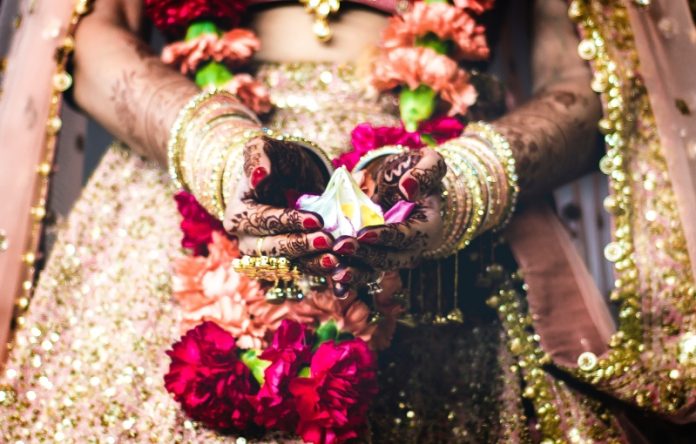 Within the melded cultures of the Caribbean are pieces of a past lived by our ancestors—plucked from their homelands or lured to the New World with promises of prosperity. Sometimes these pieces are mere remnants. At other times, they’re unmistakable—like our Indo-Caribbean heritage, especially prominent in countries like Trinidad and Tobago, and Guyana. It is celebrated in the forms of East Indian dress, festivals, and food, which over time, have been embedded into the very idea of what it means to be West Indian.

We see it in gold threads sewn into the hems of richly dyed silks, smell and taste it in heavily seasoned curries, and live it in myriad celebrations and festivals tightly woven into the fabric of our Caribbean existence. We can call a saree, a dhoti, or a kurta by its Indian name without even thinking twice. We know that deyas, little clay pots filled with hot coconut oil, are lit on the darkest day of the year to celebrate Deepavali, the Festival of Lights symbolizing the victory of good over evil. And, we also know that curried chicken with aloo and channa are not just fillings swathed with tender breads called roti, but staple foods for many.

The Indo-Caribbean community’s culture and practices have crossed socio-political divides, just as East Indian indentured laborers moved across oceans during the mid to late 1800s. What we have embraced now as our Caribbean norms, took years to assimilate. But, just as kalapani—the journey across the black seas from Calcutta to the New World—was fraught with many hardships, equally was the acceptance of East Indian culture and heritage met with dissidence and contempt.

The Dalit—the lowest social group in India, the untouchables—included widows and separated women who couldn’t remarry, as well as single women who could not find husbands. At the outset of indentureship, it was usual for Dalit men to seek economic prosperity in the Caribbean, but by the 1800s, without a lucrative future in India, Dalit women held to the promise of the New World and sought out this life with less favor.

These were the people who birthed East Indian values in the Caribbean and shaped what we understand of those cultures today. By way of the time-honored traditions passed down between generations of families, from the intimate practices in pujas (sacred ceremonies) to festivals like Hosay and Eid, the culture of this group has spread to include a plethora of food, music, dance, and art.

By the end of indentureship in 1917, those who stayed behind secured parcels of land and began to carve their space in the earth. You see, for East Indians, land ownership is critical when establishing identity. It is spiritual. Land plus kinship represents a place in this world and with it, Indo-Caribbean people practiced their customs, culture, and values safely and largely uninterrupted.

Indo-Caribbean people assimilated with Afro-Caribbeans throughout the region, where the culture has resonated powerfully via the preservation of traditional norms, religious practices, and spiritual observations from Hindu culture. “Douglas” (pronounced doog-laz) are the children of East Indian and African parents. The merging of their cultures is called “douglarization”.

In the jhaji bundle—a makeshift suitcase, men and women brought seeds, plant trimmings, and spices from the East, that literally shaped the lands upon their arrival. From these cuttings and saplings, flowering plants such as tulsi (holy basil) are scattered across the countryside and guard many Hindu homes where jhandi flags (prayer flags) stand erect.

Now, the islands of the Caribbean where East Indian indentured laborers settled are decorated with flowering plants that are integral to Hindu prayer and spiritual practice, as well as cuisine. These secret treasures are used to flavor foods and brew teas that cure common illnesses and maladies.

East Indian culture has also impacted the architectural landscape. The jhandi, colorful triangular flags tied to long bamboo poles and grouped together, mark the presence of Indo-Caribbean homes. In Trinidad, The Temple by the Sea, the colorful and detailed Sri Dattatreya Yoga Centre, and its ornately decorated Hanuman Statue, shape the Indo-Caribbean landscape. Numerous masjids and mosques, their dome tops in resplendent shades of forest green supported by massive bone white walls and towers, are sprinkled across the countryside.

It is in and around these places of worship that many festivals and ceremonies are observed. At Eid, for example, when the moon is carved into its distinct crescent shape, Muslims pray in the halls of their mosques to loudly celebrate the teachings of Mohammed and worship Allah. Also, to further celebrate the end of Ramadan (a holy period of fasting) during this period, the community feasts on a variety of sweet dishes if celebrating Eid-Al-Fitr, or salty dishes for Eid-ul-Adha, and share Eidi (gifts) with children while offering charity to the less fortunate.

East Indian culture is prominent in Caribbean society today due to years of integration based on trying circumstances. It is now a multifaceted ideal that has transposed itself into subgenres of Caribbean music, dance, and daily life, having created transformed images of Indo-Caribbean identity. Known as Chutney, this modern genre of Indian culture has found its place too, and just like its condiment namesake, it is a fully integrated yet distinct and unique blend of flavors.

Check Out 21 Hot Latino Celebrities You Can Still Marry (For...

How this Women-Owned Brand is giving back to Haiti