In the past 24 years since the end of apartheid, South Africa has morphed into one of the most sought-after vacation spots on the African continent. As a black traveler, I was unsure of what to expect when I visited. But now that I’ve been, I can categorically say this: Its turbulent history will tug at your heartstrings and simultaneously inspire you, because the country’s gradual progress shows that change–even if slow–is possible. What’s more, its biodiversity and dramatic scenery will both beguile and confound you, and its present-day fusion of music and food will be a deliciously pleasant surprise.

The mega-diversity of South Africa’s woodlands, coastal areas, mountain ranges, floral varieties, and endemic species combine to provide spectacular landscapes, as well as multiple opportunities for great wildlife exploration everywhere you turn. There’s something awe-inspiring for everyone. From the rugged mountain ranges of the Richtersveld desert, to the geological wonder that is The Valley of Desolation in the east. If the savannah isn’t your natural habitat, no worries. You can also dive into the cosmopolitan culture of city life, like the legislative capital of Cape Town.

Much like in the Caribbean, South African cuisine is a convergence of tasty ingredients, wide-ranging spices and cooking methods influenced by its indigenous, immigrant and expat populations. The delectable results cause an immediate explosion of flavor on the tongue. Every meal I had there left me wanting more. Don’t leave without trying an authentic braai (barbecue), babotie (spiced minced meat baked with an egg-based topping). Then try malva pudding (every kind of decadence you can imagine on a plate), Cape Malay curry (famous for its fruity and full-bodied flavor), and…KFC chicken in Cape Town! Yes, you read that right! The greasy, but oh-so-good grub from Sir Colonel Sanders’ kitchen is the best I’ve tasted outside of Trinidad and Jamaica.

With its range of private and public wildlife reserves, big-game spotting is one of the most popular tourist activities. Looking for lions, leopards, rhinos, buffalos, and elephants? They’ve got you covered. More interested in seeing cheetahs, wildebeest, impalas, hyena, giraffes or hippos? No worries, they’ve got those too.

The best part about a South African safari is that you can choose the vacation style that best suits your personality, preferences and pocket. There are luxury, glamping, tent, caravan, and cabin/forest hut options. One thing to note is that while public reserves usually have larger herds, their rangers must stick to the public roadways, so if the animals don’t come out when you’re there, it’s a wasted game drive. However, if you stay at a private reserve you’re allowed to go off the road and into the bush to track the animals. I did that, and it was well worth the extra dollars, because those spontaneous detours yielded many memorable encounters.

As a person of color, no trip to South Africa is complete without a visit to Robben Island, the stark prison now turned thought-provoking museum where Nelson Mandela and other freedom fighters spent years in exile, near Cape Town. It is one of several World Heritage Sites in the country. Other points of historic interest include the Apartheid Museum in Johannesburg and the shanty town of Soweto, the southwestern township that gave birth to the freedom movement.

For visual interest, journey to Cape Point and the Cape of Good Hope. Some other highlights include the beautiful Chapman’s Peak Drive, arguably the most scenic five-and-a-half miles you’ll ever come across in one consecutive ride. And explore the epic 360-degree city views you get atop Table Mountain, which sits 3,500 feet above sea level. Also, the riotous color that abounds at Kirstenbosch Botanical Gardens makes it instantly Instagram-worthy. It’s a nature reserve and expertly nurtured garden that houses a wide variety of plants, many of which are rare and endangered species.

According to 2016 estimates, South Africa ranked eighth in the world in wine production, and the country produces about one billion liters annually. There are four main wine regions – Stellenbosch, Paarl, Franschhoek and Wellington – and I encourage you to set aside a day to visit one or more of these. The town of Stellenbosch, which is about an hour outside of Cape Town, sits at the center of the oldest wine routes in the country. It’s a picturesque little village bordered by the dramatic outline of the Hottentots Holland Mountains on one side, and Dutch-style architecture homes and oak-lined streets on the other.

Even if you’re not a wine aficionado, you’ll enjoy it. Most days out of the year I am a teetotaler, and I still had fun. If you prefer not to indulge in copious wine tasting, you can snack off plates filled with cheese and crackers, soak in the scenery, browse art galleries, or dine at local eateries.

I visited South Africa in November when the weather was just starting to warm up. Their summer runs from December to March, autumn is April to May, winter is June to August, and spring is September to November. For optimal visibility on a safari, the best time to go is between May and October because it’s their dry season.

Read more of Thompson’s epic adventures around the world on her Instagram and at her travel blog, MyTravelStamps.com. And check out her exclusive Island Origins guide to traveling in Nevis. Plus, read our interview with the intrepid traveler discussing her globetrotting life. 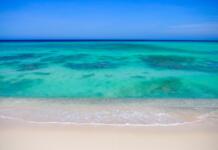 You Need These Comfort Caribbean Snacks In Your Stash