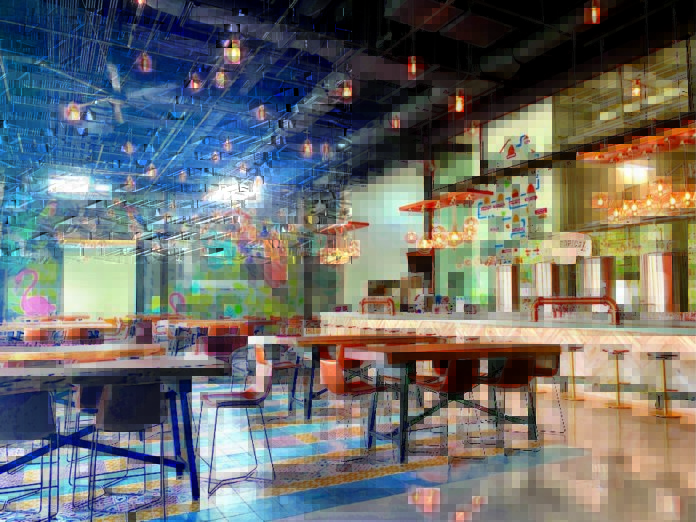 Tucked away among the bustling bars and art galleries of Wynwood lies a piece of pre-revolutionary Cuba rescued from history. Welcome to Cervecería La Tropical ― home of the original Cuban beer and a revival of Cuba’s oldest brewery, now reborn in Miami.

Under a lush canopy of palm trees, guests now taste the beer that birthed the whole industry on the island. The Blanco-Herrera family opened the first Cervecería La Tropical brewery in 1888 on the banks of the Almendares River in Havana. By 1904, the property grew into a true destination. There was live music and dancing amid romantic tropical gardens and baseball games in a stadium where the infield dirt was made of crushed beer bottles. Crowned as one of the prides of Cuba, the brewery, at its height, was reportedly responsible for over 60% of all beer production in the country.

This changed following the Cuban Revolution when the brewery was seized and nationalized by the Cuban government. Eventually, the original brewery fell into a state of disrepair and was closed. And unlike other Cuban brands like Bacardi, the beer was not available outside the island.

It was decades later, in 1998, that Manny Portuondo, a fifth-generation member of the Kohly family who sold the land to the Blanco-Herreras for the original Cervecería La Tropical, embarked on the journey to restore this Cuban treasure in his hometown of Miami. With his partner Ramon Blanco-Herrera, a fourth generation grandchild of La Tropical’s founder, he fought to restore both their families’ legacies. Portuondo even mortgaged his house to pay for La Tropical’s label trademarks.

In all, restoring the brand became a two-decades-long process with extensive research into the brewery’s history. “I would spend months going through catalogs, books and magazines, looking for any book, article and piece ever written about La Tropical,” Portuondo recalls. “I became an expert in the Cuban beer industry, in La Tropical history, and the contribution that La Tropical gave to Cuban society.”

The final piece came when he found the last head brewer at La Tropical, Julio Fernandez-Selles, who coincidentally lived only 10 blocks from Portuondo’s home. Selles has since passed away, but he was key in recovering the formula. “Not only did he validate the framework of the recipe that I had, but he showed me how to brew it,” says Portuondo. “The method of brewing is different, but the base of the original formula is basically the same.”

Many Cuban-American families are leveraging Cervecería La Tropical as a community space to tell the stories of the old country, and what it meant to them, and imparting that heritage to the generations that come after them.

In many ways, the new brewery’s design pays homage to its historical predecessor in Cuba. Walking onto the grounds feels a little like stepping back in time. Standing at the entrance are two vast white pillars with flamingos and the words “Jardines La Tropical” embossed in gold, the design, inspired by Cuba’s Oldest Brewery, is ornate grand gate.

Beyond these pillars lies a 10,000-square-foot courtyard with a performance stage and a botanical garden with foliage, including rare orchids, curated by Fairchild Tropical Botanic Garden. The brewery’s interior also impresses. Visible to guests, the shining steel stills are equally beautiful and powerful, with an annual brewing capacity of 32,000 hectoliters per year. Covered in colorful decorative tiles and murals by artist Ernesto Maranje, the restaurant has ample seating options and the taproom offers 6 craft beers with plans to increase to 20.

The stunning design makes the property feel right at home in trendy Wynwood. But Portuondo hopes the space also reflects Cuba’s Oldest Brewery and the soul of the brand. It wouldn’t be surprising on any given Sunday to find three generations of a Cuban family at La Tropical. As Portuondo explains, many Cuban-American families “are leveraging Cervecería La Tropical as a community space to tell the stories of the old country, and what it meant to them, and imparting that heritage to the generations that come after them.”

I’ve seen people come in here and have tears in their eyes because it’s bringing them back to their youth in Cuba.

For executive chef Cindy Hutson of famed Caribbean-inspired restaurant Ortanique on the Mile, it was Portuondo’s vision and passion that persuaded her to join the team. “I kind of go on gut feeling for projects that I do,” she says. “I have to share the passion with whoever is creating the project. And I felt it immediately with Manny.”

She has channeled his passion for the brand’s cultural heritage through the menu with the flavors of guava, mango, and other tropical ingredients sourced from the neighboring garden grounds. Signature dishes offer contemporary takes on Cuban classics, like customer-favorite Cuban-style empanadas. She has even taken inspiration from the brewery’s beers, serving up mussels with beer-braised Spanish chorizo and bacalao fritters beer-battered in La Original.

The beer and the food are only small, albeit delicious, parts of a much larger story. “I’ve seen people come in here and have tears in their eyes because it’s bringing them back to their youth in Cuba,” shares Hutson. For Portuondo, there’s no greater legacy. “At the end of the day for me, my partner’s family, and other Cubans, the revival of Cervecería La Tropical is not just about the beer. The beer and La Tropical [are] just a means to extend our heritage into the next generation.”