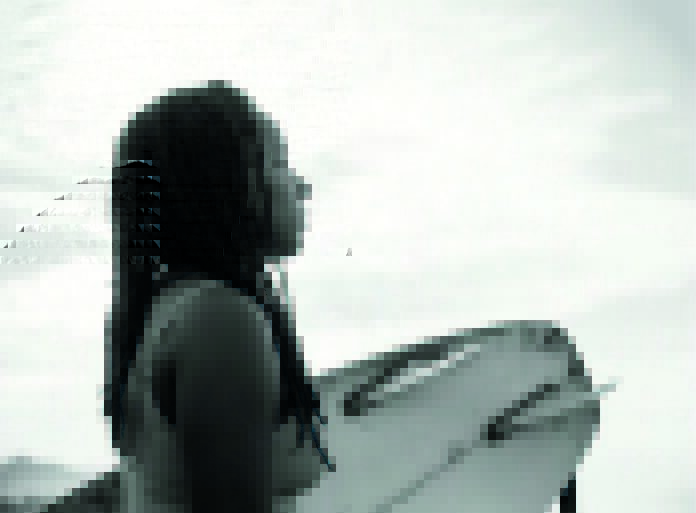 As a pioneer for surfing in Jamaica, Imani Wilmot is determined to nurture the island’s next wave of women in her sport.

Along the gray, rocky shoreline of Bull Bay in Jamaica, the sea is rarely quiet. Churned by eastern trade winds, the water breaks against the reef, creating reliable, steady waves. This combination of natural forces has made the area a cradle for Jamaican surfing ― a spot where riders can cut their teeth in the sport.

For professional surfer and coach Imani Wilmot, these waters also nurture her future legacy: getting more Jamaican girls to ride the waves. That’s the goal of Surf Girls Jamaica, the island’s first and only all-girl surfing club. Founded by Wilmot, the club provides a safe and nurturing environment for girls of all ages to learn the sport, advance their skills and build confidence in the water.

The task is deeply personal for Wilmot, who grew up riding Bull Bay’s waves on the heels of her father Billy “Mystic” Wilmot ― the founder of the Jamaican Surfing Association. His local club, Jamnesia Surf Camp, is credited with starting the movement in the country. As part of this surfing dynasty, Imani went on to compete alongside her brothers, Inilek, Icah and Ishack. Now the current Jamaican female champion, she was just a child when she premiered on the international circuit at the ISA World Surfing Games.

But many times, she was the only girl carrying her nation’s colors. “I competed and represented Jamaica in the sport since I was 14, but there were so few of us girls,” says Wilmot, looking out to the familiar horizon from the Jamnesia Surf Camp.

In a nation known for its female athletes in other sports like track, netball, soccer and swimming, this absence feels even more profound. Surf Girls Jamaica is steadily working to change that, by building the same targeted organizational support young women enjoy in other fields.

“Just like we have the Reggae Girlz and the Sunshine Girls, we have to increase the development of the surfers,” Wilmot explains. “The point of starting Surf Girls Jamaica is to increase the female surfing population, so we could have a team representing us.”

Each weekend, Wilmot’s proteges take over the shores of Bull Bay, including her own five-year-old daughter, NyaTafari. Among the 25 members, nine girls are part of the intensive advanced group, training hard with tournament competition as their endgame.

“From that core group, I saw that these girls were consistent, they spoke to me about their desire to become professional,” says Wilmot. “We do not have any girls under the age of 18 representing Jamaica on a global scale, so we have to increase those numbers.”

Though small, this mighty band of girls represents the sport’s changing face. The advanced group is part of Black Girls Surf (BGS), an international organization dedicated to uplifting and encouraging black girls specifically to pursue their dreams of becoming professional surfers. Wilmot is the director of development at BGS, founded by U.S.-based Rhonda Harper.

In addition to Jamaica, the BGS network has camps in Senegal, Sierra Leone, Liberia, Nigeria, Ghana, South Africa and the United States. There are also plans to open more in the Caribbean. The international collective helps attract support from major surfing brand Hurley, which sponsors BGS advanced programs — meaning full-time coaching, training, equipment, clothing and entry fees for those already in competitions across the world.

Success for Wilmot, however, isn’t just about winning trophies. Conquering the waves is also about helping the girls feel more in control of their lives. “We want holistic development, [supporting] their emotional, physical and spiritual needs,” she explains.

This rings true for soft-spoken teenager Zoe-Anais Bain. As part of the advanced training program, she has seen the benefits of surfing beyond the sea. “Surfing helped me to be more persevering,” she confesses, smiling. “When I am not catching waves, I may feel weighed down and wanting to give up, but then I just say ‘keep going.’ When I do catch it, I feel so good.”

The 14-year-old Convent of Mercy Academy student (who loves going fast on the waves) also finds a deeper strength from the relationships she’s built with the other girls. “I get to spend time with my friends,” shares Bain. “We are always encouraging each other.”

For Wilmot, coaching has only deepened her love of the sport. Surfing is still the place where she centers herself. Out there, “you become very present in the moment, and it makes everything else around you almost disappear,” she said wistfully. “That is a thing I take into life. If you deal with things in the moment as they come to you, it gets a bit easier. You won’t get overwhelmed by everything happening in your life. So when you clear up one thing, then you are on to the next.”

This focus was with her as she trained for the 2021 ISA World Surfing Games Olympic Qualification in El Salvador this past May. She and a contingent of five others, including her brother Icah, represented Jamaica. Though Jamaica did not qualify for this year’s summer games in Tokyo, Imani was proud to continue to showcase the island as a competitive force in the sport.

With this in mind, she plans to shift from her own career to developing this next generation. “I am at a stage where I don’t need to be competing anymore. I will focus more on the training aspect and getting younger girls into competitive surfing.”

Then and beyond, choppy or calm, Imani will always be on the rocky shores of Bull Bay, watching her girls.