Thanks to its infectious beat and positive messages, reggae music has gone far beyond its island origins, inspiring fans everywhere. So it’s no surprise some of the best reggae concerts in the world aren’t in Jamaica. International concerts have popped up around the world to service the genre’s global fanbase. These concerts also attract reggae’s biggest stars. So for your next musical adventure, we’ve rounded up our favorite reggae festivals to check out.

Best of The Best: Miami, FL

South Florida might as well be declared another Caribbean territory, with its huge island Diaspora. So it’s no surprise Miami’s Best of the Best show attracts a slew of fans as well as some serious star power. Last year alone attracted the likes of Mavado, Capelton and newcomer Shenseea. Playing every Memorial weekend at Bayfront Park in Downtown Miami, Best of the Best claims to be the biggest Caribbean stage show in North America.

The glittering casinos of Las Vegas may be the last place you’re expecting to find an epic reggae festival. But the infamous city certainly knows how to put on a show. And Reggae in the Desert pulls out all the stops for this one-day blow out, complete with traditional island bites and a craft fair. And after a long day jamming to the likes of Third World, Morgan’s Heritage and Cocoa Tea, fans can also enjoy a little fun at the blackjack table too.

For well over 30 years, Reggae Summerjam lights up Cologne, Germany every summer with the some of the biggest reggae and dancehall stars. The line-up ranges from stalwarts like Ziggy Marley to Reggae Revival performers like Chronixx, as well as the hottest dancehall acts like Alkaline. But the festival makes a great spot to check out less conventional artists, as they always shine a spotlight on non-Jamaican reggae singers like the German-born reggae star Gentleman.

The one love vibes flow strong at the Rototom Sunplash Festival. For 25 years, the epic 10-day event has taken over the city of Benicàssim in Spain. Reportedly the biggest reggae festival in the world, Rototom attracts a line-up of killer stars old and new like Protoje, Jah Cure, Koshens, and The Might Diamonds. These mark just a few among the 200-odd artists performing day and night in a wall of constant sound. However, the festival strives to go beyond the music, hosting social forums and art symposiums to explore the genre’s deep roots.

Though the youngest festival on our list, the Welcome to Jamrock Cruise has already made a splash. For a whole week, reggae diehards sail the high seas and rub shoulders with their favorite stars. Launched by reggae star Damian “Junior Gong” Marley, the cruise’s roster always includes a bevy on artists from the iconic family. The big name also attracts top performers like Sean Paul, Beenie Man and Taurus Riley. The luxury cruise goes from Fort Lauderdale to Jamaica, and back again.

Check out our other round-ups of great Caribbean destinations. 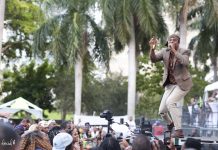