The Caribbean may be all about sunshine and good vibes, but every island has their dark side: from haunted houses to legendary ghost stories. We’ve rounded up our favorite haunted destinations for your next spooky trip.

Now a popular venue for romantic weddings, Rose Hall Great house has a dark underbelly that belies its elegant architecture and expansive gardens. The infamously cruel plantation owner Annie Palmer (dubbed the white witch of Rose Hall) called this place home. Legend has it that guests can see her reflections through the antique mirrors around the mansion, guarding her property from the afterlife. You can enjoy the spooky atmosphere during Rose Hall’s legendary night tours, or (for those faint of heart) explore the historic property by daylight.

This historic hotel in San Juan offers a little bit more than your regular room amenities. A former Carmelite convent dating back to the 1600s, the building now houses one the the city’s chicest boutique hotels. But the previous residents didn’t quite check out. Guests also report sounds of the covent’s nuns swishing through the hallways. A few even claim the convent’s founder Dona Ana de Lansos y Menendez de Valdez woke them up (gently, of course) when they overslept. Now that’s a wake-up call.

Originally built in 1614 by the British, the St. Catherine Fort on St. George’s island has see many a naval showdown. So it’s natural the historic site has collected some spirits along the way. One persistent ghost named George became such a nuisance around the lower chambers that some locals got fed up and held an exorcism in the 1970s to set him free. The ceremony however didn’t seem to work, and Bermudans have learned to embrace their friendly ghost. Now the fort (and George) has become a popular destination for local haunted history tours.

El Tunel de Guajataca, or the Guajataca Tunnel in Isabela, Puerto Rico, is a manmade tunnel constructed in the early 1900s. The tunnel was used as a sugar cane route, transporting the sugar from farm to city. However in the early 20th Century, tragedy struck when a freak train accident killed dozens of passengers. The tunnel is now allegedly haunted by the victims and visitors to the site have reported hearing the echo of voices as they passed through. Though the beachside site is now a popular site for photographers, be prepared to get goosebumps walking through the tunnel.

Nevis, the small Leeward island, is one of the spookiest in the Caribbean. While the remote island is home to many creepy spots, the Eden Brown Estate is one of the more infamous. In 1822, Miss Julia Huggins lived on the island and was engaged to be married, moving into the estate after the wedding. However on her wedding day, her fiance accused his best man of trying to have an affair with his soon-to-be-wife. They ended up dueling and tragically killed each other, leaving Huggins heartbroken and alone. It is believed that she still roams the estate to this day, with visitors reporting sounds of weeping, especially at night. Bring a friend if you want to check it out, this estate might be too scary to brave alone.

Built in 1724, this halfway underground crypt in Barbados was bought by a wealthy family for the burial of relatives. The Chase family buried three family members together in this spooky tomb, but they didn’t stay buried. After reports that something weird was happening at the vault, the burial team arrived back at the site. They removed the heavy marble that covered the entrance and were shocked to find the three coffins tossed around and now standing against the walls. They moved them back to their original place but years later when opened again, the coffins were displaced in this same way. The team found no visible evidence of weather or human manipulation, so they moved the coffins back and added sand to see footprint tracking. Months later, the coffins were once again violently strewed against the wall and there were no prints in the sand. After all of this commotion, the coffins were moved to another location, but the crypt remains open to the public. Enter at your own risk.

As one of the most infamous locations for Voodoo practice in Haiti, the Grand Cimetière De Port-au-Prince might be one of the most haunted sites on the islands, for both the living and the departed. In 2010, a magnitude 7.0 earthquake struck Haiti, leaving hundreds of families in need of a burial site for their departed. Unfortunately, many were not able to afford the fees and victims’ families began to leave them in makeshift coffins along the sidewalk outside of the cemetery gates. The cemetery itself suffered major damage from the tragic 2010 earthquake, leaving collapsed tombs, exposed coffins and scattered bones along the walkways. The ongoing practice of Voodoo within the cemetery is also a scary site with locals bringing offerings to scatter throughout the rubble and graves.This array around the cemetery definitely adds to the spooky vibe as visitors to the site still report sounds of spirits and ghost sightings.

In the 19th Century, Isla de Cabras, a small island off Toa Jaja, Puerto Rico, was used as a quarantine station for European ships passing through. During the time, Yellow Fever and Cholera were running rampant, so anyone that was infected would stay on the island to avoid contaminating the people residing on Toa Jaja. Many sick travelers were exposed to inhumane treatment and most died from either that or their diseases. Their spirits are said to still haunt the coast. 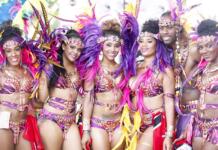 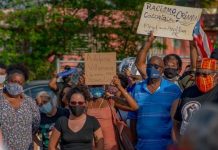 Why Caribbean Carnival Marches on To The Steel Pan Beat