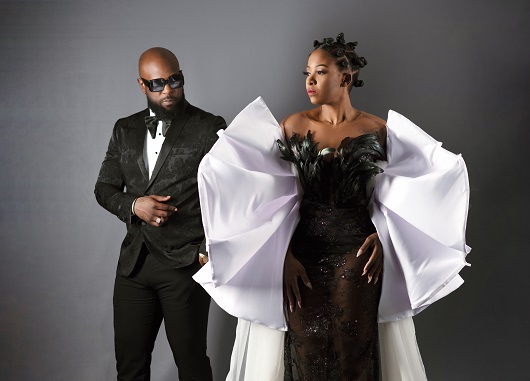 The couple sits, shoulders touching, as they relate their love story. When I ask them about the first time they met, the woman answers, “He snubbed me!” The man shouts into the screen, “No, no, no!” She laughs hard, her head vanishing from the camera view as rolling chuckles stream through. She pats his shoulder as they go back and forth, weaving their story between two voices, one presence. Many people don’t get to see this intimate side of a relationship, much less between two musical luminaries. The couple is none other than Fay-Ann Lyons and Ian Antonio Alvarez, otherwise known as Bunji Garlin.

Both are soca superstars in their own right. Lyons was the first person to take home the Power, Groovy, and People’s Choice Awards on Trinidad’s Fantastic Friday in 2009. She also went on to win the Carnival Road March that year, becoming the first soca artist to win the genre’s triplet of titles and the only ever to accomplish it while pregnant. Garlin won a Soul Train Award for Best International Performance with the song “Differentology” and a Grammy for his contributions to Skrillex and Diplo’s Grammy-award winning Best Dance/Electronic album, Skrillex And Diplo Present Jack Ü. But the duo do not consider these career achievements to be solo victories.

According to Fay-Ann, the couple’s origins can be traced to her father’s love for Bunji Garlin: “He’d be, ‘Bunji this, Bunji that.’ He just would not stop talking about how phenomenal this guy Bunji Garlin was.” When they finally met backstage at the Hardcore Brass Festival in 2001, it was her father, calypsonian Austin “Super Blue” Lyons who introduced them. Garlin said hello, politely, but quickly disappeared before they’d discussed much.

Lyons playfully speculates that it was because she wasn’t yet famous. “I was this little nobody to him. He thought he was a big shot.” She imitates him posturing in his fashionable-for-the-time baggy attire. Garlin assures her it was because he wanted to be respectful of Super Blue, who was, and continues to be, one of his idols for his ability to energize the crowd using his jump-and-wave style of delivery. At the festival, their paths had crossed, but it was a missed connection.

It wasn’t until years later, when Lyons was coming up on the soca scene, that a good broadcast connection brought her back on Garlin’s radar. “I heard her on the car radio and I pulled over to listen to the whole song.” Garlin recounts being amazed, wondering who this artist could be. “She was approaching this like something from hip-hop. It was crazy. There were some guys who had this big radio. They were screaming: ‘Who’s this girl?’ And little did I know I had met her already.”

Not long after, Lyons said she got a call from Garlin, who pretended he had actually been trying to reach his sister. Bunji massages his head, smiling and embarrassed. He explains, “I was feeling really bad, I was really trying to call you but I didn’t know how to say it.” Soon, it was history. They wed in 2006 before welcoming their daughter Syri to the world in 2009.

The two came from different backgrounds but shared a love and passion for music initially fostered by their families. Garlin, whose parents are from Saint Lucia and Venezuela, got his first taste of music from his family’s involvement in the church, where he used to play drums in the band. His brothers were also church instrumentalists while his sister was in the choir. His dad was a DJ and had a sound system.

Lyons’ Trinidadian parents are professional musicians — Super Blue, renowned for calypso, and Lynette “Lady Gypsy” Steele, known to command a soca stage. “I had no choice but to hear and see and sing and live everything culture,” Lyons jokes. Both her parents continue to create music independently and in collaboration, and they will often provide feedback on each other’s musical endeavors.

Fay-Ann and Bunji: Beyond the Music

Lyons and Garlin have built their lives around their daughter, now 13 years old. “What she brought to our household was purpose, structure and discipline,” says Garlin with a grin. He goes on to recount how, before they had a daughter, they would travel endlessly and only make brief stops at home.

It was wild and exciting, but did not result in a grounded state of mind and certainly was not a lifestyle ideal for a child to thrive in. Lyons stresses the importance of creating balance and priorities in her personal and professional relationships, especially as a parent. “I was determined to make the time to be a mom.” She admits that as the daughter of two people in the industry, she knew how chaotic it could be. She didn’t want to “mess up this little human being’s experience of being a kid” and did not want to neglect her career.

Garlin, for his part, emphasizes, “You just gotta do it. And it becomes easier when you want to do it.” Lyons smiles and you can see how much joy it brings her to be able to attend their daughter’s school and extracurricular activities. “I didn’t want to bring a child into the world whose school plays I couldn’t sit in front at and clap. It was prioritizing and making sure that when we could be there that both of us showed up, cheered for her and represented for her.”

Since coming together artistically, they have influenced each other’s music. “Before, I would dwell on a song,” Lyons shares. One of the first times they went to the studio together, she remembers “he did four songs in one night! I was like, ’What the hell is that?’” Lyons laughs. Garlin explains that he started his career as a competition artist, which meant “all our things were designed for the street, everything had to be off the top of your head.”

This gave him a take-no-prisoners approach to writing and recording. “It was Fay that was like you should add dimensions to the music. Where I would be straight and hard to the target, she would help me add more finesse, some shape, color and design.” Together, they’ve grown personally and musically. Fay-Ann admits that many of her biggest hits were written in about five minutes because of what she’s learned from her husband’s approach to songwriting.

And they see themselves continuing to grow. “We will be on a whole larger stage in the world of music,” Garlin predicts. “Where? We don’t know yet; that is unpredictable.”

Lyons agrees. “What we can say is that we’re not going to be reserved. …We’re going to places where you don’t normally see soca music artists going and bringing everything with us. Every stage, we are bringing Trinidad and Tobago.”

Both artists talk about the importance of maintaining and promoting their culture, whether the stage they’re performing on is local or international. “My culture to me is such a diverse, beautiful, amazing thing that I strongly believe that we are yet to truly get the world to understand and appreciate,” Lyons said.

Garlin adds, “We Trinidadians always get fed that we shouldn’t hold onto ours as tight as because we want to sell them something, so we should paint it, market it, to make it more accessible. … (But) as small as we are, we are still important in the world. We as a people have made the world focus on something that we’ve created.”

And the world seems to be listening. For this superstar couple, it is not just a love for one another, but also for family, music and Trinidadian culture that keeps the pages of their love story turning. 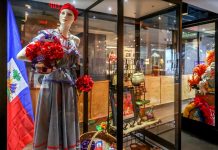 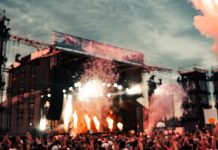 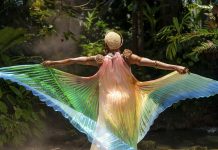 Sharon Marley Metamorphs in New Video for ‘Butterflies in the Sky’