“As a designer, inspiration comes from anything. Our sole purpose is to make it wearable.” So says Haitian-American fashion designer and stylist Glavidia Alexis, whose regal creations bestow an air of ethnic elegance. She muses about even the most abstract sources of stimulation. “I can be inspired by a lizard. Do I like the texture of his skin? Do I like the sebum that he produces? Do I like the color that comes out when he’s mating?”

It took her a while to work up the courage to develop her Genin pa Presse collection. “Its inspiration starts from vodouism and what each entity and spiritual deity represents. And the colors of each look or each collection signifies each spiritual object.”

Trained in London and Italy, the daughter of vodou priestess Mambo Vivi was inspired by the elaborate dresses her mother would wear in her role as a spiritual leader. But vodou garb has a conventional aesthetic, and Alexis “didn’t want to be offensive to the traditional silhouettes and colors and shapes.”

In reworking time-honored style, she started at home. She estimates that she may have made nearly 100 dresses for her mother over a three year period. A very supportive Mambo Vivi, who has an impressive social media following, shared Alexis’ looks with her instagram followers, who then began switching up their styles in homage to fashion. “That’s when I knew I had something,” said Alexis. “I think of it as a form of flattery. It was the kind of confirmation that I needed.”

With the implied approval of their virtual family, Alexis got to work. She took care to think about everyone the collection could represent. Her most elaborate dresses invoke the priestess, but other, more subdued designs represent the wider vodou community including dancers, servers and drummers, for example.

At its core, the collection honors the spirits (loa) at the heart of the ceremony. Alexis refers to the colors and textures, and the essence of deities like Danbala, the creator of life; Azaka, the spirit of the harvest; Ezili Dantor, parallel to the Black Madonna; and Bawon Samedi, father of the spirits. Most Haitians, though, worked in the fields, or enjoyed dancing. The silk and satin appropriate for celebrating the high spirits aren’t quite the right wear for these more mundane activities, so you’ll find cotton and burlap in Alexis’ style files as well.

The spirits and the practitioners are reflected in outfits that go from light brunches to fancy dinners, or from a day at the office to a day on the yacht. Though her pieces are often ornate, she encourages people to dress them up or down. “I’m also a stylist so I like my separates to be interchangeable.”

Alexis’ work is a balance between her source of inspiration and the customer she’s creating for. She’d like it if people would dress for the lifestyle they envision without creating a bubble for themselves in their own minds. “You can be inspired by a lifestyle and not be tied to that lifestyle,” she says. Even if you’re dressing up that way. 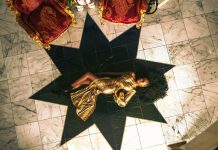