Sweet potato pudding recipes have many iterations throughout the Caribbean. In this version, familiar elements like baking spices and raisins are present, but so are elements like rum, ripe bananas, and three types of milk that make it extra creamy. This method starts on the stove and ends in the oven. Chef Thia created this dessert, served in adorable little ramekins on an episode of Taste the Islands Season II.

Remember that Caribbean sweet potatoes aren’t the same as the orange American ones. Look for “boniatos” or the Asian-style white or purple skinned sweet potatoes when making this. Try the delicious Haitian sweet potato pudding recipe here. 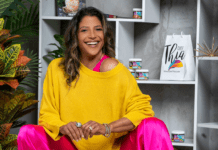