Amid the deafening soca music and dance-weary revelers, Beverley Johnson ably manned her Bev’s Jerk Center booth at Miami Carnival. She and a three-member team drove in from Atlanta two days earlier, then set up a stand that did brisk business throughout the event.

“Mi used to this, mi have a passion fi what I do an’ mi like it when people enjoy di food,” said Johnson between frequent trips to her trailer for supplies.

On October 2, five days before Miami Carnival’s closing day, Johnson opened Bev’s Jerk Hut in Atlanta. It is her second restaurant in Georgia; she has operated Bev’s Jerk Center in nearby Decatur since 1992.

Both establishments offer a menu of largely jerked foods, especially chicken and pork. This spicy cuisine, popular for many years among rural and working-class Jamaicans, has also attracted American fans in the last 20 years.

Some of the biggest names in dancehall/reggae have dined at Bev’s Jerk Center, including Beenie Man, Bounty Killer, Spragga Benz and Shabba Ranks. Johnson has also prepared meals for R Kelly and Erykah Badu.

Bev’s Jerk Hut, she explained, is a bit different from her Decatur eatery.

“It’s in a more open (urban) setting so I get more Jamaicans, Americans. Lots of working people. I think it going to do well ‘cause people love authentic food,” she said.

Johnson, 54, is from Lluidas Vale, a farming town in Jamaica’s St. Catherine parish. Going to the market as a child with her grandmother prepared her for a life in jerk.

Viola Smith, her grandmother, had a special seasoning that comprised scallion, pimento seeds and leaves, Scotch Bonnet and bird peppers. That concoction was a hit with customers, and was also a winning combination for Johnson when she moved to New York and eventually started her own business in Brooklyn.

Johnson is not confined to the restaurant. Bev’s Jerk Center has been at major jerk and barbecue festivals in New Orleans, Chicago, Baltimore, Florida, Pennsylvania, Virginia and Washington DC.

Being outdoors, she noted, is the perfect advertiser. “I want to show everyone that Jamaican food is clean, fun and great to eat.” 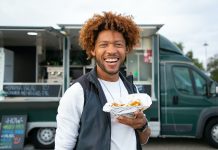 Walk the Path to A Natural Healing with Traditional Mecidine