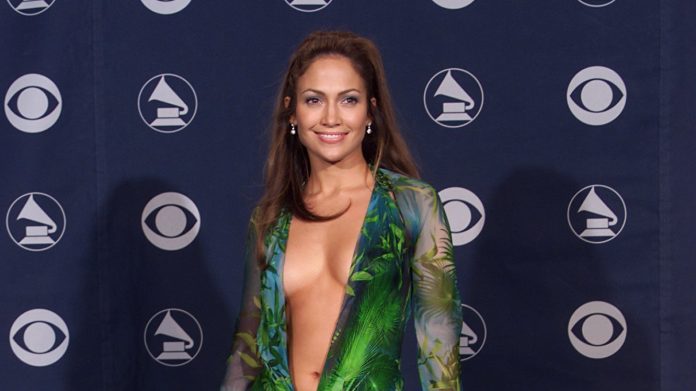 Jennifer Lopez – who style has been marked by floppy hats, metallic dresses, and generally outfits that defy the natural laws of physics – has had many notable fashion moments. But perhaps nothing was as show-stopping as the green Versace dress she wore to the Grammys. The dress, which gave birth to Google Images, is so iconic that we mainly associate it with J.Lo (she wasn’t even the first celeb to wear it). But it almost didn’t happen.

The year was 2000; J.Lo was busy shooting The Wedding Planner with Matthew McConaughey and recording her J.Lo album. The Grammys sort of crept up on her, meaning her dress choices were slim. Recently, J.Lo retold the story for her new YouTube series, Moments of Fashion.

“There’s nothing out there, You guys waited too long. I’ve been trying to do a fitting with you for weeks,” J.Lo recalled her stylist, Andrea Lieberman, telling her.

On the day of the Grammys, J.Lo was getting her hair and makeup done before she had even picked out a dress. Instead of being presented with an endless amount of options, J.Lo was given two dresses to choose from: a white one and the Versace one.

“My stylist goes, ‘I think you should really wear the white dress because three people have worn this dress, Donatella herself. It’s been seen. This is the Grammys. You need to wear something else,’” she remembered.

Still, J.Lo wanted to try on both dresses. “I put on the green dress and come out and [my longtime manager] Benny [Medina] goes, ‘That’s it. That’s it. Don’t even talk about it. That’s the dress,’” she said. “And of course my stylist is mortified.”

J.Lo’s only concern with the dress was whether her “boobs were gonna pop out on stage or anywhere along the way.” But double sided sticky tape came to the rescue, and J.Lo felt very secure in the dress the entire night.

Watch her recount the rest of the night below.

Try The Ultimate Split Peas Dhal Recipe with kale and...