Citadelle Laferriere, built 3,000 feet above sea level atop the mountain Bonnet a L’Eveque, is one of Haiti’s most prominent national symbols. Designed to thwart a French invasion, the fortress was commissioned by King Henri Christophe of Haiti after the revolution and completed in 1820. Christophe’s former residence, Sans-Souci Palace, is located nearby, in the town of Milot. Both the Citadelle and the Palace have been designated UNESCO World Heritage Sites.

The final approach to the Citadelle is steep and winding.

The final approach to the Citadelle is steep and winding.

The interior of the fort.

The surrounding landscape, as seen from atop the Citadelle’s walls.

The fortress walls are about 40 meters high, when measured from the top of the mountain.

The Sans-Souci palace in Milot sits at the base of the access road to the Citadelle. The palace, completed in 1813, was the residence of King Henri Christophe of Haiti.

Inside the remains of the Sans Souci palace.

A bust of Queen Marie Louise, outside Sans Souci palace. 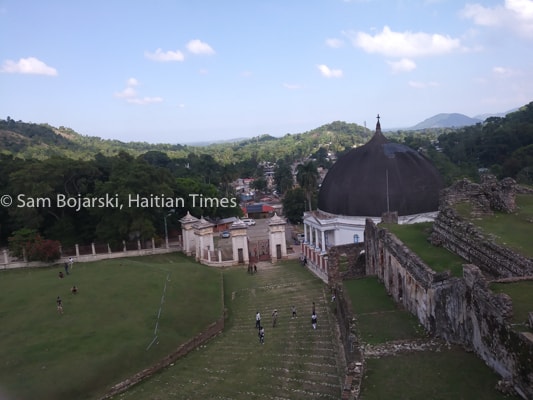 The town of Milot, as seen from the backside of the Sans-Souci palace.

Visitors to the Citadelle can drive three-fourths of the way up the mountain but must walk or ride a horse for the remaining quarter of the journey to the fortress.

Cannonballs lie in pyramidal stacks near the fortress walls, just as they did in the early 1800s.

Approaching the field of cannons near the base of the fortress walls.

A man begins his approach to the Citadelle on foot.

Cannons manufactured in several different nations still remain in the Citadelle’s gallery. This cannon is engraved with the logo of the “Sun King,” Louis XIV.

An aqueduct runs from the fortress, down the mountain.

The fortress walls are about 40 meters high, when measured from the top of the mountain.

Does This Jamaican Hotel Have The Coolest Pool in the World?

How to Succeed in Business: 6 Practical Steps (Part 1)