Boston-based singer-songwriter Rebecca Zama has been performing since the age of three in venues across Massachusetts and the East Coast. Last year, she got the opportunity to perform the National Anthem in front of 37,000 people at Fenway Park and is also a published poet. Her poem, Optimum Me, was inspired by the 2010 Haiti earthquake.

Zama speaks to the Haitian Times on embracing her heritage through her music and what is like working in the music industry.What inspired you to pursue music for a living?

What inspired you to pursue music for a living?

I have had a passion for singing my entire life, even before I was able to talk, I was singing. At the age of five, I knew that I wanted to pursue music as a career and I started performing publicly, learning to play piano, and writing my own music.

Who do you consider to be some of your biggest musical influences?

Lauryn Hill, Bob Marley, Whitney Houston, Brandy, Michael Jackson, Beyonce, Etta James, Amy Winehouse, Carole Demesmin, and Emeline Michel are some of my musical influences. The list could go on forever. There are so many artists that I have listened to that have helped to shape me into the artist I am today. 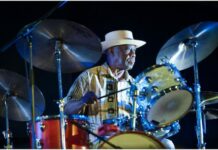 Drummer Andrew Cyrille to be honored at Vision Jazz Festival