Art fans now get a inside look at the early family life of famed Caribbean-American artist, Jean-Michel Basquiat. His two younger sisters, Jeanine and Lisane, sat down with ABC7 reporter, Sandra Bookman, for an inside look at his life.

The artist was born on December 22nd, 1960, in Brooklyn, New York. His father was from Port au Prince, Haiti, and his mother was a New York native of Puerto Rican descent.

When Jean-Michel was 8-years-old, he was hit by a car while playing in the street and suffered a broken arm. While recovering, his mother brought him a medical textbook Gray’s Anatomy. The book’s detailed anatomical drawings were the start of a World-renowned artist’s inspiration, says his sisters.

As a young boy, they say he was quite the prankster. Telling us a story of when Jean-Michel convinced them to call 20 some odd food delivery businesses all at once, just for the laugh of when 20 vendors approached their front door.

The family saw him grow up in fame. His art not even at the beginning of its recognition.

“The way that his words and artwork resonate with people. Resonates with the experiences we are having today. I can’t say I thought ‘my brother is going to be an artist’ but I knew and recognized his artistic talent,” said his sister Lisane Basquiat. 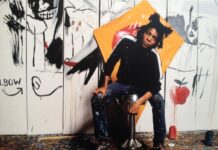