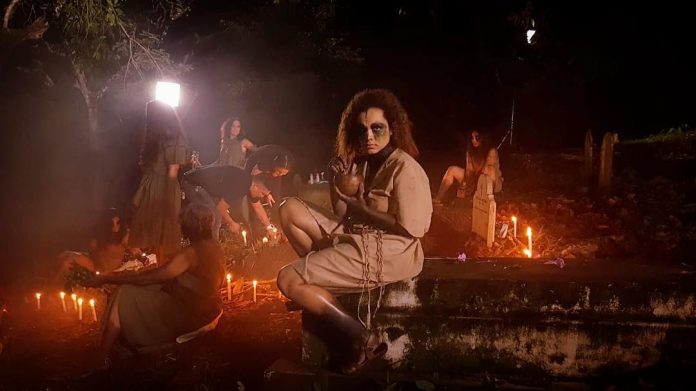 Horror is having a slow but steady rise in Caribbean and Central American cinema. Hot on the heels of Eres tu, papá? the first-ever Cuban psychological horror film, Panama’s own Sol Moreno is bringing to the screen what’s being billed as that country’s first feature-length horror film. And, as its title suggests, the dark and creepy flick is making full use of local lore. Diablo Rojo PTY follows a driver of one of those famed neon-colored and wildly overdecorated “diablo rojo” buses who gets cursed by a witch and finds himself adrift in the haunted Chiriquí jungle where he may not be able to come out of it alive.

Reimagining the myth of La Tulivieja (a kindred spirit to the more well-known La Llorona) and incorporating all sorts of other local folk tales, Moreno’s film is a true DIY effort reminiscent of those B-grade horror movies that first made zombies and vampires staples of big screen scares. Starring Blood In Blood Out‘s Carlos Carrasco, Alejandra Araúz, Julián Urriola, Blass Baloy, and Renán Hernández among others, Diablo Rojo PTY hopes not only to scare the bejesus out of audiences but get them interested in those traditional myths that have been frightening Panamanians for generations. Check out the teaser for the film below to see how that brightly-lit bus ends up engulfed in a dark world ruled by gleeful witches smeared in chicken blood and where knives and arrows look like they have a mind of their own.

The Vegan Baked Tempeh Bacon that’s worth giving up the real...

7 Haitian Destinations You Need To Add On Your Bucket List