We might be entering a new era, guys: One of rap’s biggest feuds is (maybe?) coming to an end now that Cardi B and Nicki Minaj have agreed to scale back the bickering and “keep it pushing”—at least in public. Their Shakespearean-level quarrel, which played out for weeks, culminated into a massive, shoe-flinging Fashion Week fracas last month, but their new plea for positivity is, at the very least, a step toward heel-free territory.

Things got worse before they got better, though, and the calls for peace only came after the two went at it like it was their job.

Twitter’s reaction every time there is a Cardi B and Nicki Minaj feud pic.twitter.com/NGOK0JUXRU

The whole episode started when Nicki brought up their fight on Queen Radio, maintaining her innocence during the dispute and claiming that the giant forehead knot everyone saw on Cardi’s forehead during Fashion Week hadn’t come from her security team, but from Love and Hip Hop star Rah Ali. Cardi hit back by posting an epic series of non-stop, back-to-back, progressively louder videos in which blasted Nicki as a liar and called her out for acting tough despite standing back during their brawl.

“Make sense when you talking…I know what there’s footage of, you standing on the wall talking about ‘I’m standing right here.’ Miss Chun-Li, the Street Fighter. Get the f*ck out of here,” Cardi says in the video.

It’s an award-winning monologue, and Cardi addresses pretty much every rumored tension that has followed the two rappers from the beginning: She talks about the strained “Motorsport” verse, she brings up accusations that Nicki liked social media posts about her mothering skills, and she even touches on Bad Bunny-adjacent gossip (Apparently, Nicki alleged that Cardi was upset about her feature on the “Krippy Kush” remix, something Cardi says she didn’t care about since she was busy promoting “La Modelo” with Ozuna.)

“You go on your Twitter and you start liking s–t like endorsing that type of nasty a– f–king behavior. B–h, you’re f–king sick in the head.”

Even Dictionary.com weighed in.

Finally, Nicki basically requested that the world take one collective deep breath and said she wouldn’t be discussing “this nonsense anymore.” 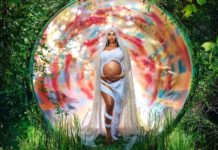