“It’s a mayo bomb,” Carl Ruiz said in a 2018 live video review of a McDonalds menu classic. “It’s very rubbery. The lettuce is overpowering… almost has a chemical taste to it. A couple of beers [and I] can put down a couple of these McChickens though.”

Pinky up and no-nonsense mask on, Ruiz approached reviews of fast food chains with the delicacy and seriousness they deserve. His dry sense of humor will be missed, not only by his thousands of viewers and fans but by many in the celebrity chef sphere as well.

“I’m heartbroken that my friend chef Carl Ruiz is gone,” Guy Fieri said in an Instagram post. “His ability to make me laugh and smile under any circumstances was only outshined by his talent as a chef.”

Food writer and judge Troy Johnson echoed the sentiment saying “He made people laugh who’d forgotten how to laugh. He set rooms on fire. He was the match and the kerosene.”

Carl Ruiz reportedly died in his sleep of a heart attack. Just this past June, he opened La Cubana in the Meatpacking District in NYC. As the name implies, the restaurant celebrates his heritage with dishes like masitas de lechon, and ropa vieja. His work family shared the news on social media referring to him as Carlito, saying “Here at La Cubana, Carl paid proud tribute to his Cuban roots each night, and it is here that Carl’s legacy, undeniable spirit and passion for his culture will live on. We hope we make you proud, Carlito.”

Ruiz had over 25 years of experience in the food and restaurant industry which began with a degree from the Institute of Culinary Education in New York. Though he is most recognizable for his appearances on The Food Network, Ruiz had his own show on Sirius XM, and worked at restaurants all over the world.

His most important ingredient when it came to cooking? “Dancing always.” 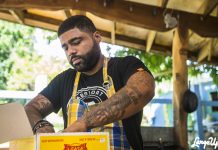