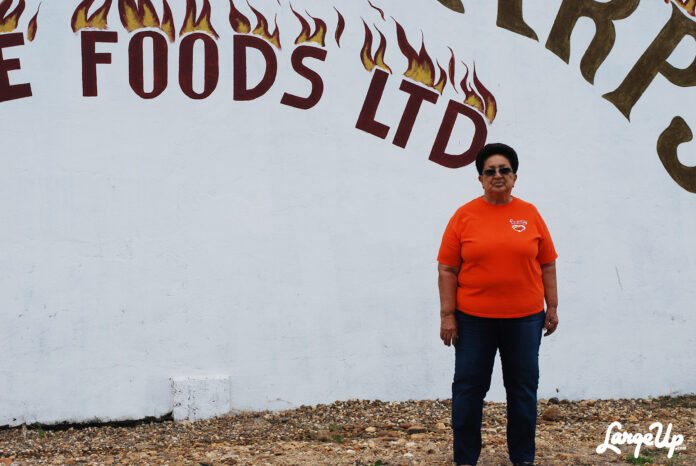 Growing up in a Belizean-American household in Brooklyn, the staples of our cuisine and culture were preserved in our family’s kitchen: Fry jacks and guava jelly for breakfast on Saturday mornings, rice & beans and stew chicken for Sunday dinner. And, of course, Marie Sharp’s pepper sauce was in constant rotation, for that added kick. Marie Sharp’s habanero-based blend is not just an icon of Belize, it enjoys global renown. No less of a hot sauce aficionado than Hillary Clinton has even cited it as her favorite.

I recently took my first solo trip to my motherland with the intent of meeting and interviewing Ms. Sharp. Her farm and headquarters, located in Belize’s Stann Creek District, is just miles away from some of my family, so I asked them to take me there; no e-mails, no calls, no forewarning. It was an overcast day, and I was quite nervous, but I told myself it was now or never. I walked into the office and asked for Ms. Sharp. She was about to take her lunch break when I told her I came from New York to interview her, and she gladly obliged.

In 1981, one month before Belize gained its independence from Britain, Marie Sharp made her first batch of sauce. “It was just an experiment, really,” Sharp tells me, in the dimly lit office of Marie Sharp’s Fine Foods, Ltd., her husband and daughter sitting at desks a few feet away. “At that time I did not realize that I was going to be doing what I am doing today. I grew some habanero peppers for a person in Belize City that was making pepper sauce. Unfortunately, he was doing it on a very small scale and I planted a lot of peppers. I got stuck with a lot of peppers and no market.”

Carrots, the not-so-secret ingredient in Marie Sharp’s most popular sauce

This, of course, would turn out as a blessing in disguise. Sharp returned home, took out a small kitchen blender, and, like that, the seeds of a hot sauce empire were sown. “[I] start blending and putting into pails and adding salt, and blending and adding salt, you know?” she recalls. “And, of course, [I was] going through lots of blenders because I was asking them to do what they were not made for. I ended up with a garage full of pepper mash, and I had to find something to do with it. “ She began to experiment with different formulas, developing six varieties, including the bright orange, carrot-based variety the company would become known for. “It was actually one of my friends that said to me, ‘You should go bring this to market!”

How Four Authors Uncover The Caribbean In These New Books

Here’s Why Zoe Saldana Is The Mother Of The Year Every...